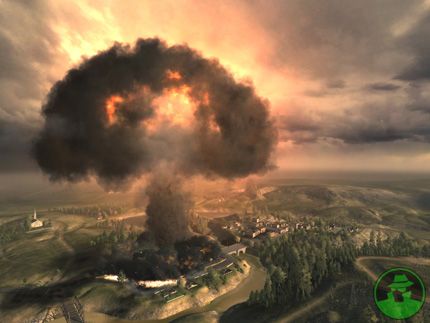 Image linked in from GameSpy

The acclaimed World in Conflict (WiC) is a fun, beautiful and fast paced video game for the PC. It has a several infantry, armor and air units, a decent story, and good looking destructible environments, smoke, fire, water, and explosions. Never have artillery barrages and nuclear explosions been so beautiful on the PC.

Nevertheless, after finishing the single player campaign I am left with a feeling that something is missing. WiC is supposed to be a RTS/RTT game but where are the strategies and the tactics? Pounding your enemies to pieces using artillery and air strikes before rushing them with, freely replaceable, tanks does not require a lot of thinking nor strategy. When the pace of the game is so high and the penalty of loosing a tank is so small, the most important thing you need to think about is the placement of your artillery fire. Flanking and other tactics which were very useful in games like Company of Heroes are not really necessary and in many of the missions you are not given the luxury of time to apply any tactics as Ivan keeps coming in waves.

The developers of the game, our Swedish friends at Massive Entertainment, have done a good job creating a quite fun game even though it lacks some of the tactical/strategical aspects of other games. Norwegian Rangers are even included in the game, however with a quite poor English accent and I suspect our Swedish neighbours are trying to make fun of us.